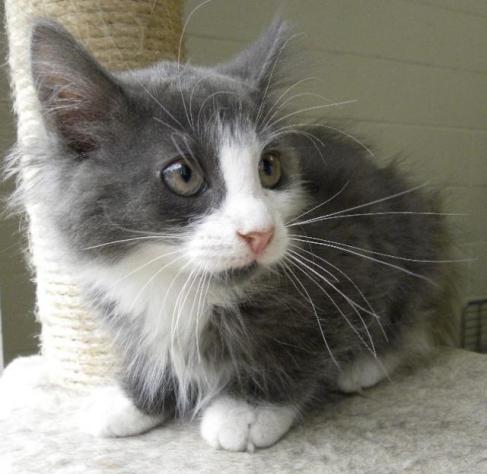 The Christmas I was 6, Santa Claus brought me a grey and white kitten that I named Mittens.  My very own pet!  How exciting!  I loved that cat to bits, even when she had enough of me and left red lines down my arms in her attempts to get away from my adoration.  Really, I think she loved Mom more than she loved me.  But Mittens was my first pet and I loved her with all my heart.

That was the first Christmas my parents were divorced and my dad was not living with us.  I suspect that had a lot to do with Santa’s decision to bring me a kitten–Dad was and still is allergic to cats.  It is also, perhaps coincidentally, the first Christmas of which I have very vivid memories.

Three years later, Mom & I moved and Mittens, of course, came with us, along with a ton of houseplants, my guppies and my grandmother, just to help out for a bit.  Left behind were my prized angelfish, my favorite huge stuffed tiger with “real emerald” eyes and an old-fashioned globe on a floor stand given to me by my great aunt, fascinating because it featured countries I had never heard of, like the Holy Roman Empire.  My mother had culled my belongings to make the move easier.

Shortly after the next Christmas, my first in our new home, my mother gained a new boyfriend, and soon the boyfriend was living at our house during the week and we went to his house in the country on weekends.  His house was a lot of fun–there was a creek, and huge trees he promised to build me a tree house in, a pond with an island and a canoe to paddle about, and two loving dogs!  I had dogs on the weekend and Mittens during the week.  It was like heaven.

Soon I was told that my mother was going to marry her boyfriend.  He was going to move in with us and rent his house out.  For some reason, he decided his dogs could not both come with, so he found a new home for my favorite of the two, the girl, and brought the boy to our house.  Mittens of course did not appreciate this interloper.  Actually she appreciated neither the dog nor the man.  I was at first happy; I had a new dad, a new dog, and my beloved cat.

But then something happened.  At the time I did not grasp its significance, but I was horrified by it as only and 11 year old can be.  Mittens tried to rub her face up against my “new dad’s” leg and he pulled back his foot, pulled it back all the way, and with all the force of it, kicked Mittens all the way across the room.  It was the first time I had seen the violence that lurked inside of this man.  It was the first glimpse of the pain, the fear, the shame and the anger that were to become my life for the next ten years.  The fear and the pain in Mittens eyes were soon to become mirrored in my own, I just did not know it yet.

“He who is cruel to animals becomes hard also in his dealings with men. We can judge the heart of a man by his treatment of animals.”
― Immanuel Kant

2 thoughts on “In the Beginning”

speaking out about my abuse, my depression and my life

Dawning on Me Daily...

Every day I find new joy and inspiration in the midst of my crazy, upturned life!

An amateur artist determined to change the world.

~Cruising through my Life~

A blog of priceless & memorable memories